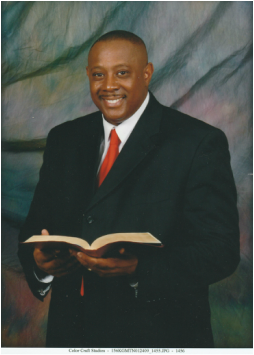 Dr. Rickey L. Dugger is the Senior Pastor of the Norris Avenue Missionary Baptist Church in Memphis, TN. He is a distinguished, accomplished, charismatic Man of God who loves the Lord with all his being. This love is exemplified through his interaction with people from all walks of life. He is a loving pastor that definitely has the people at heart. Consequently, the NAMBC church family takes on the personality of our beloved pastor and has been established as a church that is located in the heart of the community and has the community at heart.

In addition to being highly educated, Pastor Dugger has also been an accomplished businessman and has been highly successful in the Corporate Business Sector. He retired from General Mills, Inc. in July 2021 after working in various positions for over 37 years. He started his career in September 1984 as a Sales Representative, and He moved from a Sales Representative to various other duties including: Sales Assistant, Territory Manager, Account Manager, and Customer Account Lead Contact over the course of his Sales Career.

He had moved and worked with General Mills Grocery Sales Customers in the following states - Texas, Arkansas, Mississippi, Missouri, Alabama, Florida, and Tennessee. His main contact customer the past 20 years + was Associated Wholesale Grocers Division who serviced and supplied customers in the
Southeast Markets.

Rev. Dugger has served as Pastor of the Norris Congregation over the past 28 years as of August 2021. He began his ministry at the NAMBC with 40 members in August of 1993. The membership has grown tremendously over the years. During his tenure the church established the NAMBC foundation and has been awarded a 501c3 designation  which enables the church to sponsor Youth Programs and Outreach Ministries throughout the year for the Memphis Community. A few of these programs include the “Feed The Homeless Ministry” and the MIFA ministry. Together these programs are able to feed and clothe 50 to 100 men and women from various shelters each week.

Outside of the NAMBC church family, Pastor Dugger is also very active. Pastor Dugger has been nominated as President of the Memphis Baptist Ministerial Association (MBMA) for the years of 2022/2023 here in Memphis, Tennessee and Surrounding Areas. He had served as Finance Chairman for the MBMA for over the past six years and has served as Vice-President for the past two years. He has worked with the Memphis Hamilton Alliance which works with the community and city training youth and young adults for their future. Additionally, he and First Lady Dugger also volunteer each year feeding the homeless during the holiday season.

Some of the core values that drive his ministry are his beliefs in God’s word concerning Faith, Family, and Finance. He also believes in the old traditional saying, “It takes a village to raise a child”. He is also forever grateful and deeply appreciative to God for guiding him and his family over the years.